In 2010 the IBO conducted a study about T-STRIPE

The effectiveness of T-STRIPE in preventing condensation has already been proven by two independent entities; the Austrian Institute for Healthy and Ecological Building (IBO) and the IFT Rosenheim. 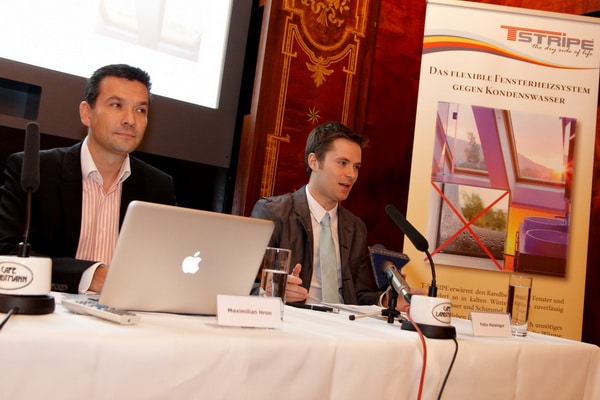 Maximilian Hron (left), inventor and managing director of T-STRIPE und Felix Heisinger of the IBO, author of the study, at a press conference presenting the study’s results. In 2010 the IBO conducted a study about T-STRIPE

Mr. Heisinger summed up the effectiveness of T-STRIPE: ‘With T-STRIPE none of the limits for condensation or mold spores were close of being violated, and neither condensation water nor mold did occur.’

The study also unveiled another positive side effect of T-STRIPE. By heating up the windowpane along the edges the resulting warm air circulation raises the temperature of the window as a whole. Most of this heat radiates back into the room, raising room temperature and therefore indoor environment quality as well. Up to 63.2% of invested thermal energy is being reflected back into the room.

Oftentimes people who have problems with condensation on their windows are being advised to simply air their rooms more often and to turn up their radiators. Compared to these methods T-STRIPE offers several advantages.

By increasing the airflow within a room excessive humidity could be reduced and an increase in comfort can be achieved as well – as long as certain temperatures are not being exceeded – but condensation water can never be fully avoided. Additional heating expenses also depend on what heating system is being used. All of these methods do not reduce the likelihood of condensation occurring.

Only with T-STRIPE condensation water becomes a thing of the past, the heat dissipation effect adds to a comfortable room climate.

„…it should be considered that – especially with regards to availability on the market – the T-STRIPE system marks an unprecedented contribution on the subject of condensation and mold spore prevention in conjunction with window constructions and exterior walls.
„Usage of the system in connection with a controlling unit for the purposes of minimizing energy costs (i.e. thermostat) can generelly be recommended.“

„One of the advantages of the system is the fact that it can be assembled and installed even in places where no other alternatives remain.“

„In closing it should be remarked that assembly and installation of the system is entirely customizable and can therefore be practically invisible to the naked eye.“

The effectiveness of the Heating system to prevent condensation:

Over the years I spent finding a solution for my problems with condensation water, I met a lot of people who were equally frustrated. After coming up with an invention I decided to introduce it onto the market.’ says T-STRIPE inventor and engineer Maximilian Hron. ‘Since I always wanted to provide my customers with a satisfaction guarantee, I made various experts conduct studies on T-STRIPE, the Window heating system for the prevention of condensation water and damage to insulation as well as mold spores.